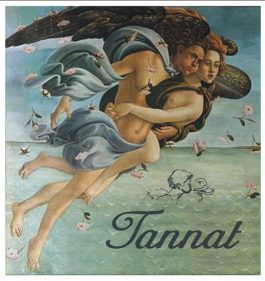 Pablo Fallabrino grew up in a family of winemakers.  His grandfather, Angelo Fallabrino, moved to Uruguay from Piedmont in 1920, and in the 1930′s he started two wineries with five different vineyards. Eventually, his father Alejandro took over, becoming one of the key players in the Uruguayan wine industry, until he passed away in 1991.  When Angelo died, in 1995, Pablo took over a single vineyard-Vinedo de los Vientos, and in 1997, he decided to start his own winery.

Located just 4km from Atlantida, a coastal city, Vinedo de los Vientos, or “Vineyard of the Winds,” sits where the River Plate estuary meets the Atlantic Ocean.  With 17ha under vine, the family practices sustainable farming.  ”It’s really wild,” says Pablo, “we don’t like an overworked vineyard.”  Using no insecticide and no-till farming, they do not filter their wines, and only fine with egg whites if necessary.  They employ 20% selected yeasts, “just to start the fermentation,” says Pablo, “…then you have yeast in the air…ten days after harvest, yeast is everywhere.

“In 2000,” says Pablo, [I realized] “I wanted to do something unique, so I started to produce blends…[using] old winemaking techniques.  The white ["Estival"] is a blend, but it’s fermented all together…I use the ripasso technique for Tannat…now I’m planting Italian varietals.”

With their recent acquisition of Catedrral, 10ha of vineyards at 500m, Vinedo de los Vientos now has the highest vineyard in Uruguay.  They’ll plant six varietals in this experimental vineyard and, “for three years, we’ll harvest and select the best varietals,” says Pablo.  ”It’s two to three degrees [C] cooler than the other [vineyard]…and it’s steep, so we’ll have to make terraces…I want to see how the grapes develop there, to start natural, then see what I have to do."