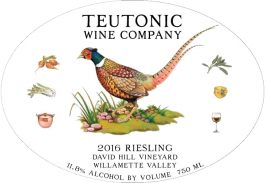 “We feel very lucky to work with fruit from David Hill Vineyard, as it is one of the oldest in the Willamette Valley and has historic significance in Oregon winemaking. Both David Lett and Charles Coury, who were friends, both started their Oregon vineyard endeavors in 1965, though there are still conflicting opinions on who actually planted the very first vine in Oregon, David Lett or Charles Coury. You will get a different answer depending on who you ask. Though we know David Lett, also known as Papa Pinot, evolved into the most significant figure in Oregon’s wine making history, while Charles Coury failed and went back to California where he was originally from.”