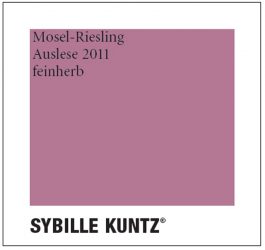 The Sybille Kuntz Estate is one of the very few wineries in Europe to have a woman Chairman and chief winemaker.   Sybille has spearheaded herself to the top of Riesling production in the traditional male-dominated German wine industry.  While there are other women winemakers in Germany, including Eva Clüsserath at Angsar Clüsserath, Frau Knebel at Knebel, and Theresa Breur at Breuer's Estate, none of the other talented women above have gained or hold complete control of their Estates' Rieslings like Sybille Kuntz.

The estate has gained prominence and critical acclaim for its refined-drier style of Riesling.  In 2011, Sybille and her husband Markus went from producing wines in their own dry style, to crafting a portfolio of six wines that represent the traditional quality of German viticulture, from Qualitätswein to Trockenbeerenauslese. Their farming and vinification practices have been practicing organic since 1990, and in 2013 they achieved “Bio-Weingut” organic certification.  At Sybille Kuntz, the average age of the vines are 45-80 years old, and the yields are always strictly reduced to 50 - 60 hl/ha.

At the core of their production comes the hallowed ground of the Niederberg-Helden vineyard in the town of Lieser.  Sybille Kuntz and Thomas Haag of Schloss Lieser Estate are two of the producers responsible for resurrecting this esteemed piece of the Middle Mosel. These 60-90 year old vines are some of the oldest with [partial] original rootstock in the first growth Niederberg-Helden in Lieser.  The yield is very low because of the intensive hand-work in the vineyard.

"The 2011 vintage was one of the best of this century. We were able to harvest all quality levels from Qualitätswein to Kabinett and all the way to Beerenauslese and Trockenbeerenauslese. The growing season was a very long one, with a cool spell in the summer but a very warm September and a magic, golden October. Still, we lived a moment of anxiety on the 26th of August, when a heavy hail storm hit our vineyards just after we had completed our green harvest. Nevertheless, the next day we had all our people go through the vineyards to remove the damaged berries from the grapes. Luckily, we had a warm September and nothing but sunshine in October. The result was a low yield and beautifully ripe grapes. 2011 is a powerful, ripe and elegant vintage with a balanced and delicate acidity." - Winemaker's notes. More at SybilleKuntz.de.

“This lively, powerful white features an essence of slate and sea salt fringed by touches of anise. Notes of wild berry and red currant show in mix, finishing a touch off-dry, with accents of chamomile and candied ginger. Drink now through 2025. Score: 92“ WineSpectator.com