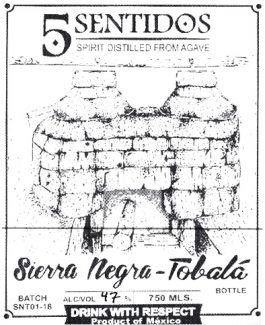 This batch is a blend of Tobalá and Sierra Negra; Alberto and his son-in-law Reynaldo wild-harvested the Tobalá in Santa Catarina Albarradas, Oaxaca. Santa Catarina belongs the Sierra Norte region in Oaxaca and is a village of about 220 people, all of whom speak Zapotec. The town itself sits at about 6,000 feet above sea level, and Alberto and Reynaldo hike up to 8,000 feet above sea level to harvest the Tobalá. The word Tobalá derives from the Zapotec “Dua blah,” which essentially means agave (Dua) from the mountains (blah). While most people associate Tobalá to be Agave Potatorum, Alberto uses the word Tobalá to refer to both agave Potatorum and agave Seemanniana, which resembles a Tobalá but grows to be almost as twice as big as a Potatorum.

Because Santa Catarina is higher altitude than most mezcal-producing towns, it gets rather cold at night, which requires them to need some help in their fermentation. The “help” comes in the form of a type of tree bark locally referred to as “encino de agua,” (Quercus rubramenta) which is an oak varietal that grows in the region and contains a high degree of nitrogen in the bark. The women in the family will strip the bark from the encino de agua logs when they are freshly harvested and still retain some moisture. Alberto will add this tree bark to the tanks which helps jump start the fermentation and keep it at temperature at night despite colder ambient temperatures. The logs, now stripped of their bark, will be used to fire his clay pot stills.

Alberto is the only person in the region still using clay pot stills; his neighbors in town have “upgraded” to copper or stainless stills.

The Sierra Negra that Alberto cultivates belongs to the A. Americana family and the sub-varietal has not been conclusively identified. They are cultivated, massive, and take up to 15 years to reach maturity.

Alberto does not weigh the agave before roasting them, he only counts them. This batch had 83 Tobala piñas (which can weigh between 5 and 35 kilos) and 4 Sierra Negra piñas (can weigh up to 250 kgs per piña) but we could estimate that by mass, this batch is about 75 percent Tobala and 25 percent Sierra Negra.