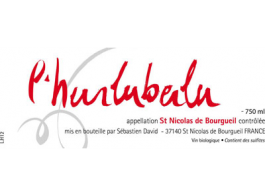 Born in Saint Nicolas de Bourgueil in 1974, Sebastien David comes from a long line of winemakers that extends 15 generations, back to 1634. Working with 15ha of Cabernet Franc that were planted by his grandparents at around the time of the Second World War, Sebastien makes natural wines from fruit that is Ecocert certified and biodynamically farmed.

Working with the ancient techniques that have been passed down, Sebastien David has been producing stunning Cabernet Franc wines since 1999. Working with whole clusters, David ferments with wild yeasts, employing carbonic maceration for 25 days, followed by a light pressing to preserve the fruit's characteristics. The wines are then bottled without filtration or fining, and virtually no sulfur is added.

New to the New York market, David is well known throughout the natural wine world in France, and his spectacular cuvees are found in the best natural wine bars in Paris. His production is relatively small, thus resulting in consistent, clean and pure Cabernet Franc. From the carbonic 'Hurluberlu' to the serious 'Kezako' and the cerebral 'Dithyrambus', these are wines to cherish and enjoy young with friends.