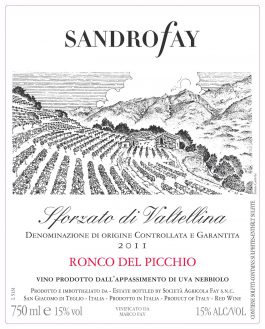 In 1971, Sandro Fay began to invest in the redevelopment of his family’s small vineyard in San Giacomo di Teglio, a village within the Valtellina Superiore DOCG. By 1973, Fay had officially established the Azienda Agricola Fay and began to slowly expand the vineyard by incorporating additional plots of land, carefully selecting vineyards with different soil compositions and altitudes between 350 meters and 900 meters on steep mountain sides. Today Sandro’s children, Marco and Elena have taken up the family vineyards. Marco studied enology in Trentino and trained in Barolo. He translated those experiences when he returned to the terraced family vineyards and began producing single-vineyard wines of distinction united around the variety Chiavennasca, known outside of Valtellina as Nebbiolo.

Valtellina stretches along the Adda valley river climbing up the steep mountains of northern Lombardy. The region encapsulates Valtellina Rosso, Valtellina Superiore, and Sforsato di Valtellina. While the Rosso designation is a relatively informal wine, the Valtellina Superiore region—where Marco Fay focused his energies—has been recognized for its elegant, light and ruby-robed Nebbiolos. And Sandro Fay stands out among the finest producers of Valtellina Superiore. The Sforsato is an Amarone-style of wine with partially dried grapes pressed 3 months after harvest. The wines are youthfully vibrant upon release from the winery but also age-worthy with their firm tannins and acidity.

The majority of Fay’s vines are in the easternmost part of the DOCG, Valgella, one of the five sub-zones of Valtellina Superiore. (The others are Sassella, Grumello, Inferno, and Maroggia.) The sub-zone itself covers 137 hectares of steep hillsides draining into small streams, or Valgel, and forcing winegrowers to commit to working the vineyards by hand. The Valtellina soils are acidic, very sandy, and slightly silty with no clay or limestone present. A small portion of Sandro Fay’s 14 hectares is situated in Sassella. Sassella is distinguished from the other sub-zones for the steep ridge that juts out from the northern valley mountain side, exposing the vines to the valley breezes and precious sunlight from the south.