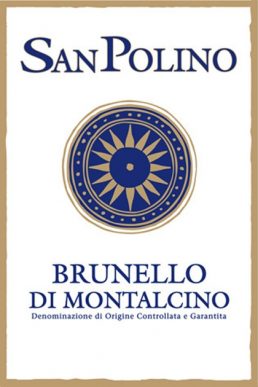 Historically, the farmstead that is now San Polino has included viticulture since before 1581 in addition to 700-year old olive trees and a preserved woodland. When Luigi and Katia Fabbro took over, most of the vines had been pulled out. Luigi, who serves as winemaker in addition to owner, had taken a winding path to arrive at San Polino in 1990. He has developed software, taught himself Sanskrit, participated in mapping biodiversity in the Amazon, and written about turning a traditional Burmese harp as well as papers on organic farming. Katia, a global traveler from London, met Luigi met while traveling in Kathmandu, Nepal with a friend, and after studying Social Anthropology and teaching she joined Luigi to found San Polino to the south-east of Montalcino.

The Fabbro’s planted their first Sangiovese vines in 1998 on a 2.5 hectare parcel surrounded by woods and shrubland and immediately began farming biodynamically. Those first vines have never been treated with pesticides, herbicides or fungicides. The Fabbro’s value the complex interactions of the microbes  in the soil and the insects and micro-organisms that inhabit the vineyard, even going so far as to attempt to reintroduce disappearing species back into the farm to establish a sustainable balance.

In 2007, San Polino added old, organic vineyards northeast of Montalcino that had a warmer microclimate and heavier sand and clay content in the soils. And the vineyards continue to grow. Around 2015, they undertook an ambitious project to clear 2 hectares of brambles and overgrowth that had overtaken an ancient olive grove. While the main intention is to train the vines to climb the living olive trees in the Etruscan and later Roman fashion, the cleared brush does not go to waste. The biomass is composted and turned into a preparation to return the nutrients and organic compounds back into the vineyard. The hope is that the preparation boosts soil’s vitality and the disease resistant properties of the vines.