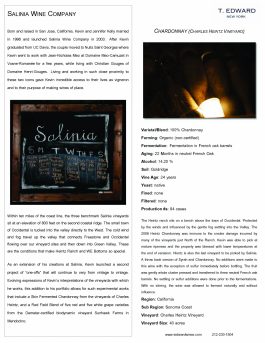 The Heintz ranch sits on a bench above the town of Occidental. Protected by the winds and influenced by the gentle fog settling into the Valley. The 2008 Heintz Chardonnay was immune to the smoke damage incurred by many of the vineyards just North of the Ranch. Kevin was able to pick at mature ripeness and the property was blessed with lower temperatures at the end of verasion. Hientz is also the last vineyard to be picked by Salinia.  A throw back version of Syrah and Chardonnay. No additions were made to this wine with the exception of sulfur immediately before bottling. The fruit was gently whole cluster pressed and transferred to three neutral French oak barrels. No settling or sulfur additions were done prior to the fermentations. With no stirring, the wine was allowed to ferment naturally and without influence.