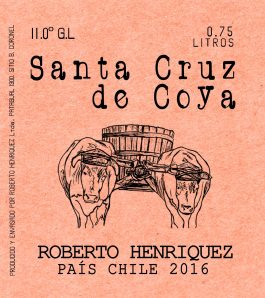 This wine is made from 100% pure País grapes obtained from a 200 year old vineyard located in Nacimiento, in which soils are granitic intrusive (solidified magma). The vines were managed traditionally without the addition of chemical fertilizers or herbicides. There was only one Sulphur application to the fines during the growing season. Santa Cruz de Coya is the name of a village established in 1595 that was a key site of the 1598-1599 uprising that ended the Era of the Conquista. The Mapuches finally won the battle against the Spanish conquistadors.

País vines embody the culture, history, tradition and character of the Chilean terroir, and they are a driving force for the journey into winemaking for Roberto Henriquez.
Roberto Henriquez studied agronomy and enology at the University of Concepción. From there, he travelled and worked with winemakers in Canada, South Africa and finally in the Loire Valley with Rene Mosse. Rene had a profound effect on Roberto’s perspective on winemaking and his progression into organic and biodynamic farming.

Roberto, originally from Concepción, returned home after his time in abroad to begin making his own wine. Returning to the traditional Pipeño methods of the original winemakers of Chile felt intuitive to the winemaking style he had adopted. The rest of his story to present is pure progression to the pursuit of the most pure wines in a true Chilean context.

His vineyards were personally and carefully selected. Working with long term fermage agreements, he farms all the land himself (with the help of farming animals). To the north, in Itata, he is working with a vineyard of old vine Semillon and blends that with Corinto (aka Chasselas) and Muscat d’Alejandria producing an orange style wine. A little further south, in Bío Bío, he is farming Pais, from which he makes the Pipeño and the Santa Cruz de Coya.

He works with carbonic macerations and ages in old Rauli wood barrels. His wines are light-bodied, translucent, refined, and full of character!