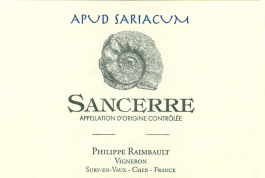 In Sancerre, just a short ride north of Verdigny, lies the village of Sury-en-Vaux, home to Philippe Raimbault, a ninth generation vintner. Owning vines on both sides of the Loire, in the Pouilly Fumé and Coteaux du Giennois appellations, Philippe has vines planted on steep slopes of les caillottes soil from the Jurassic period, an era that left behind fossils of sea creatures that are more than 130 million years old.