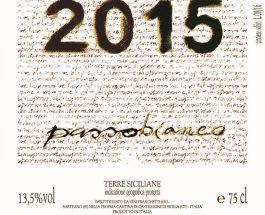 "Instead of the indigenous Carricante, which grows on the eastern side of the volcano, Passobianco is made of 100% Chardonnay. When Franchetti arrived on Mt. Etna, he planted 4 hectares of the grape on steep terraces between 850 and 1,000 meters in the contrada of Guardiola, in very loose, deep, powder-like lava that is high in minerals.

2015 was a quick and early-­‐ripening year on Etna. Across the complicated amphitheater of Contrada Guardiola, we tested the maturity of each bunch, terrace by terrace; the grapes were very round, very pale, very even. Yet, there were spots where flavors deepened, where grapes across the terraces were full of flavor.

During the first days of September, there was a good rain that lasted two days; it was evident that everything was invigorated, that things would accelerate. The taste of peaches started to show in the same terraces where it has appeared first in years past. The mature grapes were more spread out than in past years; the key as always was harvesting small sections of different terraces, some quite far from one another. The flavors changed quickly, but although the grapes seemed so sweet upon tasting, the sugars were luckily still low.
In the end, we picked almost 30 thousand bottles of plump, dense white. Each berry was the same size and color of the others: This is the result of 15 years of growth in densely planted vineyards, 12,000 plants per hectare. It has kicked off such a tremendous root competition that there's the same share of terrain now for each plant."