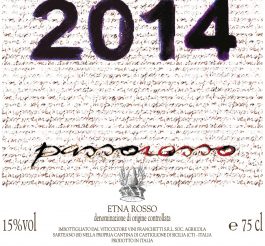 Before Andrea Franchetti visited Sicily in 2000, Mt. Etna’s profession winegrowing community had all but disbanded over the period between WWII and 1981. Commercial-scale viticulture could not overcome the cost of growing grapes in such an extreme terrain and climate, and the major 1981 and 1991/1992 eruptions of Mt. Etna were the ultimate disincentive to struggling growers from investing even further. However some vines of Carricante and Nerello Mascalese did remain viable on the terraces of Etna, even going back before 1900. Franchetti approached an owner of one neglected vineyard, and the owner settled for 1/5th his original asking price just to be rid of the property once and for all.

Franchetti’s first Mt. Etna vintage came out of the 2001 with fruit grown on a rented vineyard of Nerello Mascalese at 1,000 meters. The resulting wine from the Nerello was too light for Franchetti’s preference, which typically leans towards more robust and extracted reds, so he supplemented the Nerello with another wine to produce 200 cases of a fuller-style red. Franchetti found that Nerello Mascalese often produced wines with notes of camphor and citrus that are the result of the volcanic lava soils, and the indigenous yeasts could prove temperamental. However just four harvests later, Franchetti’s relentlessly artistic personality fashioned a representation of Nerello M. that met Franchetti’s standards, stayed true to the typicity of the site, and even garnered some critical attention.

The true triumph of creativity began in 2008 when Franchetti decided to embrace the contrade. Each contrada on Etna reflects one of the old feudal properties as laid out in the local land registry, and the early 2000’s had ushered in a growing trend of isolating vineyards and releasing the resulting wines as “contrada wines,” a designation intended to be similar to crus. By 2011, Passopisciaro released five single-vineyard bottlings from each contrada Franchetti works with: Rampante, Sciaranuova, Guardiola, Porcaria, and Chiappemacine. Today, these bottlings are named Contrada “G” or Contrada “S” to avoid confusion with the sites themselves.