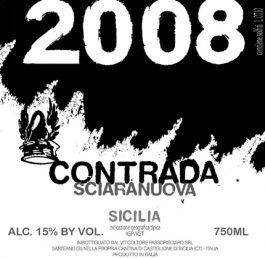 In Sicilian, “sciara nuova” means “new lava flow,” and this Contrada is located at 850 m (2,800 ft) a.s.l. on relatively new – 200 year old – lava flow. The soil is soft and crumbly, like wet carbon, and it’s located in a cool current, with exposition toward the sun from the first light of the day. The wines produced from this site are deep, large fleshed and have a rich taste of fermented hay. We own 1 hectare of this cru.

There is this languid quality in the wines of 2014. In them, there is a massive quality, full-­‐bodied with powerful aromas that hover just above the surface of the wine, instead of leaping out of the glass. Nerello mascalese darkens only slightly, and every year the shade is different. This year, the fermentation caused the dark grapes to slowly yield their special garnet color, while the yeasts were moving through the massive musts. After running the wine into the large barrels and cement vats, it will need months to become recognizable because the slow progression of the wine in the winery corresponds perfectly to the slow progression of the vines in the vineyards throughout the year. It’s apparent that the wine is dense, yet soft; it has the aroma of sandalwood, and each month it shows the same grand, free quality, which seems to defy the laws of gravity. The perfume of sandalwood in the 2014 vintage softens the more typical aromas of citrus fruits and camphor, typical of the lavas of Etna. It is in the mélange of these aromas in which the great luxury of this vintage is found.