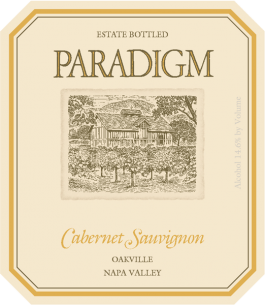 Paradigm Winery is owned and managed by Ren and Marilyn Harris, two winegrowers with extraordinarily deep roots in Napa Valley. Marilyn's grandparents emigrated from Italy to Napa Valley in 1890, while Ren's family came to California in 1769. Marilyn and Ren moved to Napa Valley in the 1960's and settled into their home just east of where Paradigm sits today. Through a career in vineyard real estate, Ren learned much about the diverse growing regions in Napa Valley. In 1976, when they decided to purchase vineyards of their own, Oakville was the clear choice. Paradigm Winery was founded several years later and began producing wine with the 1991 vintage.

Ren and Marilyn hired a young and talented winemaker, Heidi Barrett, who has been with Paradigm since the beginning. They all felt a shared passion for making great wine, and a determination to preserve the small, family-owned style of winery that Napa Valley was built on.  With an incredibly loyal team, Paradigm Winery maintains a hands-on approach to all winemaking and vineyard operations, nothing is outsourced. Every bottle you uncork was grown, crushed, fermented, barrel aged, bottled and stored on site. Ren and Marilyn have been tireless advocates for the Oakville appellation, eco-friendly farming, and environmental stewardship.

Located between Yountville Hill and the foothills of the Mayacamas Mountains, Paradigm is home to a swath of alluvial soils with clay, sand and volcanic rocks. In the cellar, non-invasive winemaking techniques are employed to retain the freshness of fruit.