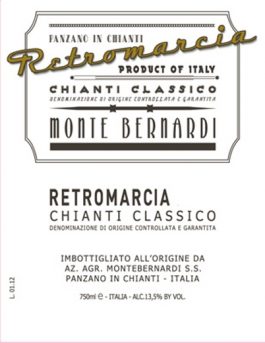 Sowing the seed in 2003, Michael Schmelzer, who is American, moved to Italy with his family and purchased 10ha of organic vineyards, in the “belly button of Chianti Classico” at Monte Bernardi.  When he planted in 2005 and began farming biodynamically, he did not yet know what it would entail or how difficult it would be, but he did know that conventional vineyards tend to spray when it rains, to help prevent the grapes from rotting, and that these chemicals simply wash off of the vines and into the soil.  He decided that if he built from the roots–from the base up–then he would have healthy vines that were less frequently inundated with mold and pests.

And, since the biodynamic principles of Rudolf Steiner’s prescribed farming techniques are over 300 years old, Michael knew that he couldn’t go wrong.  ”These farming practices are so complete,” he said.  ”People were poor [when the practices were first initiated].  They didn’t spend time or energy on things that didn’t work, so what’s been passed through the generations is what works.

Retromarcia is a deep ruby red with hints of purple; aromas of black berry, cherry and red plums, anise and spice and orange peel. On the palate it is fresh and fruity, medium-bodied, well balanced with a nice structure, juicy acidity and a long finish.