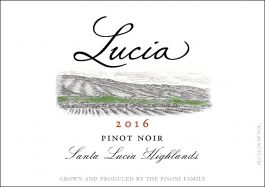 This Lucia Pinot Noir, reflects its harmonious blend of three vineyards: (47% Pisoni, 29% Garys’, and 24% Soberanes) in its deep garnet color. It begins by enticing the palate with ripe plum and raspberry, spiced cherries and black tea, and subtle notes of cedar and forest floor. As this wine continues to open up, it shows a complex palate of firm tannins and intense character. Like our single-vineyard bottlings, we use only free-run wine to develop the character of this appellation-based vintage. The three vineyards from which it has been created reflect the Santa Lucia Highlands’ diverse features, from the concentration of its mountain fruit to the light, elegant aromas of its more fog-laden vineyards.

After a difficult 2015 harvest and years of prolonged drought, the 2016 vintage saw beautiful weather conditions and a welcomed average yield of fruit. Rain returned to Monterey County in the beginning of the 2016 season (approximately 12 inches, the most our area has seen since 2011). Budbreak began the second week in March and vines showed more life and energy due to the early-season soil moisture. Strong vine growth required additional labor to tend to the shoots. Summer saw a balanced fruit set and weather conditions typical of the windy, fog-blanketed Santa Lucia Highlands. August temperatures were cooler than average which allowed for a slow, gentle ripening up to harvest. Patience was necessary for harvest—it began the first week of September and continued through the first week of October.