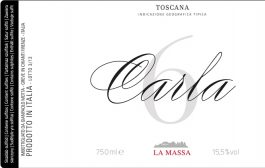 After spending time in Bordeaux, Giampaolo Motta left his family’s leather business behind in Naples and headed north to work in Chianti where he learned the art of winemaking.  Here and in Bordeaux, he developed the practices and philosophy that he would come to embody at La Massa, where Giampaolo owns 27 ha of vineyards in the “Conca d’Oro”, “The Golden Basin”, of Panzano, Chianti.  Acquiring this ancient, hilly property in 1991, with its vineyards that have been farmed since the 15th century, Giampaolo gained a reputation with the release of his first vintage of Giorgio Primo, one year later.  Proceeding to produce two Chianti Classico wines until he decided to declassify in 2002, Giampaolo immediately gained and maintained a following.

"Carla 6 comes from the desire of Giampaolo and his friend and advisor Stephane Derenouncourt to compete and collide with a vine among the most difficult and unruly: the Sangiovese."

"The project to create this wine comes first of all from a study of the soils of the Fattoria La Massa, and continues with the identification of a special vineyard,where this grape expresses its best features. Following our internal coding, the vineyard selected for the production of this wine is the vineyard No. 6 in that part name to the wine. The other part of the name instead has a dedication to his daughter Carla..."

"2013 can be characterized like an excellent growing season. After a regular germination, temperatures below average in May slowed plant growth. The development has resumed its normal course during the summer, facilitated by good temperatures and short rains at regular intervals. Little rainfall in early September allowed the plants to reach an optimum level of phenolic ripeness and we did the harvest on the 3rd of October. The year 2013 is a further confirmation that the new cellar allowed us to improve the quality of our wines. Spontaneous fermentations, extractions using the punching down method, pumping with peristaltic pumps, strict control of temperature and continuous tastings are the main processes that have allowed us to express the full potential of the grapes harvested. The wines were then aged in 30% new French oak barrels which improved the structure and aromatic sensation." Winemaker's notes. More at www.lamassa.com