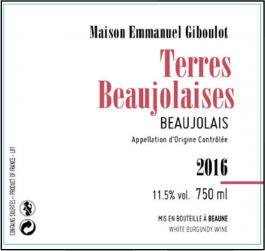 To know Emmanuel Giboulot in the present day, you would not be surprised that his father was a first-adopter of organic farming in the 1970’s. And while the family farm included five hectares of vines, one cannot say that winemaking was in Giboulot’s blood—but ethical farming certainly is. In 1985, Giboulot’s first vineyard of his own covered only 0.8 organically-farmed hectares positioned at least five kilometers from Beaune. Six years later, Giboulot positioned himself to take on an additional 0.38 hectares in Beaune. Then he expanded to 0.22 hectares of Rully vines and 1.5 hectares of Hautes-Côtes de Nuits in 1993. Along this ten years of growth, neighbors were skeptical of his organic practices and increasing use of biodynamic treatments. However this effort paid off with a 1996 Biodynamic certification and healthy, balanced vines.

Today, Emmanuel Giboulot is not alone. His commitment to—and heritage in—ethical farming seems more prescient than risky, as more and more of his neighbors have adopted similar principles. Those neighboring viticulturists who employ more interventions and more aggressive spray schedules stand out against the green and robust Giboulot vineyards that now cover 10 hectares. Much of the 10 ha. of vineyards are rented though they are maintained using the holistic practices of Giboulot and his vineyard manager, Pierre Fenals. These practices include tilling, organic composts, biodynamic preparations, and hand harvesting.

In the cellar, a stone barn with a wooden roof outside of Beaune, Giboulot manages the winemaking process with a soft touch. He doesn’t use new oak and hasn’t since 2003, he doesn’t stir lees, and he uses a mechanical screw press rather than a pneumatic one. Temperature control for the reds is maintained by an intuitive balance of submerged, hot-water pipes and opening the barn door to the cold air while fermentation is carried out in open-top, oak vats. He will filter when confronted with turbid wines, but prefers to let wines settle and clarify by themselves with time. And discussion of lunar cycles is par for the course in the cellar. Neither a Natural zealot nor a systematized interventionist in the cellar, Emmanuel Giboulot observes the shifting energy of the wines and tries to guide them towards their full potential. The result of Giboulot's efforts is a small production of tremendous quality wines created through firm farming principles and masterful winemaking.