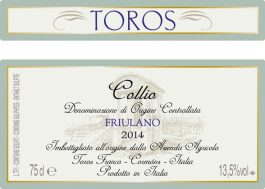 Franco Toros, a modern wine man who tends his 11ha of vines with old-fashioned skill, transformed the Toros estate and nursed it to its present influential status. He inherited the art of wine and the vineyard from his father Mario who, along with Franco's uncle Edoardo, taught him to love these hills and craft their wines, drawing on the lore of past generations. But it was Franco's great-grandfather, also named Edoardo, who in the early twentieth century settled at Novali, in the heart of the Collio Friulano. As soon as he set foot in the area, Edoardo realised its true potential and started farming grapes at a time when other families were growing a little of everything. Soon, his wine was discovered by connoisseurs from Austria, Veneto and Friuli.

Collio Friulano, located in the extreme north-east of Italy, straddles both Italy and Slovenia.The seamless succession of hills forms broad slopes with superb exposure to sunlight. To the north, the Julian Pre-Alps protect the rows from cold northerly winds while a short distance to the south, the Adriatic Sea helps to temper the temperature swings. Together, they create the climate of mild winters and fairly cool summers that is essential if the vines are to develop to perfection.

Ponca, the area's characteristic soil type, comprises layers of marls and sandstones that have been eroded over the centuries by wind and rain to create an ideal, mineral- and nutrient-rich terrain for viticulture.