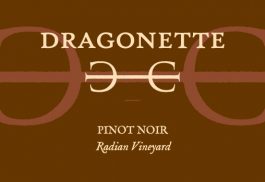 Brandon Sparks-Gillis met John Dragonette while they were both working at a retail wine shop not far off of the UCLA campus in Westwood. John and Brandon were both there to educate themselves about wine and take the opportunity to immerse themselves into the professional wine world. John was a practicing attorney and Brandon was a recent college grad who picked up the wine bug while traveling and studying geology for a summer in Italy. They began to strike up a friendship based on their common interests and ambitions in the wine world and eventually both moved on to their own winemaking and winegrowing jobs. For a time, Sparks-Gillis cut his teeth working in a bakery starting at 2a.m. and then commuting to work vineyards in the evening. He then went on to working at Demetria and Sine Qua Non. John Dragonette worked for Fiddlehead and Costal Vineyard Care. In 2003, John and his brother, Steve Dragonette, joined up with Brandon Sparks-Gillis and began to make wine under the Dragonette label with their first commercial release in 2005.

In 2008, Dragonette moved into a warehouse to scale up production, sharing the space and some equipment with Ampelos Cellars, and sourcing fruit from the surrounding Santa Barbara County vineyards. They had always been enamored with the Santa Barbara as a region that made great Sauvignon Blanc, Pinot Noir and Syrah, and they started to develop long-term and close relationships with vineyard owners. They were always hands-on as growers and to this day every site is hand-harvested under the keen eye of Brandon, John, or Steve. As production grew to 5,000 cases, Dragonette moved to their current winery in Buellton with a tasting room twelve minutes away in Los Olivos.

The depth of Dragonette’s wines begin in the vineyard with rigorous attention to detail to canopy management and crop yields. The clusters are gently handled during harvest and processing and then fermented with indigenous yeasts. There are no manipulations of the wine in the cellar either. Racking and the use of new oak is absolutely minimal. Only portions of the Pinot Noir lots are fermented with a very small amount of whole clusters, and Dragonette’s red wines are bottled unfined and unfiltered.