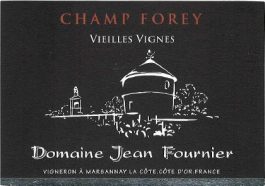 Domaine Jean Fournier is seen as one of the best producers of Marsannay and winemaker Laurent Fournier is certainly at the forefront of elevating Marsannay as a wine and as a community. Fournier’s current holdings cover 17 hectares of vines with many ranging between 20 and 70 years old and covering the most lauded sites of the AOP. With newly planted vines replacing older vines by massale selection, 21 hectares will be producing quality fruit by 2018.

The Fournier name is one of the oldest in the historical records in the village of Marsannay-la-Côte first appearing in the 17th century. The family (of Swiss origins) has been growing grapes for generations now as part of a polyculture farm with animals, grains, cherries and asparagus. But it wasn’t until the 1960’s that Jean Fournier created his domaine and started to bottle wine for commercial purposes. His son, Laurent, joined him in 2001 and assumed full responsibility for operations in 2003 at which point the vineyards began their conversion to organic farming. The vineyards were Ecocert certified organic in 2008, but this was not enough for Laurent who sees the preservation of the land and ecosystems as keys to the survival of his community. In 2016, he started employing biodynamic practices with plans to slowly convert the entire domaine for certification. Laurent’s family has held onto a coveted, small plot of 80 year old Aligoté vines but Laurent Fournier is especially attached to two special lieux-dits vineyards: Clos du Roy and Les Longeroies. These two neighboring vineyards are situated in the northern sector of the appellation and are the most recognizable names of the AOP destined for cru status.

At harvest, all fruit is sorted upon arrival to dutifully eliminate botrytis-affected fruit before entering the cellar. Laurent wants the character to come down to the plant (the vine) and not the process of what comes after. In the cellar, he begins fermentations in concrete vats and gravity feeds his free run and pressed wines to large barrels in the subterranean level of his two-tiered cellar, naturally maintaining a cool, damp environment. He rarely has more than 20% new oak in use at any time as he wants the oak élevage to bring out the latent character of the fruit rather than to become part of the profile. Fournier uses thick 600L demi-muids of Austrian oak for Bourgogne level wines and usually uses 500L barrels for his village and site-specific wines. Laurent believes that the Austrian oak is uniquely suited for his wine style because the raw wood is matured for over 5 years in a continental climate with real temperature variation so that the tighter oak grains allow just the right amount of oxygen exchange and tannin as he likes. Both primary and secondary fermentations occur without inoculations and sulfur is only added in the smallest amounts after malolactic fermentation is complete. As for fining and filtration, Laurent would prefer clarifying and fining his wine through natural settling and bottling under the positive influences of high barometric pressure and the full moon.