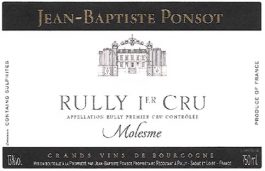 Jean-Baptiste Ponsot farms a total 8.5 hectares in the Rully AOP with a deep respect for the land that his family has been fostering for three generations. He employs organic practices but hasn’t sought out certification, preferring instead to prioritize the intrinsic health of the ecosystem and his vines. Domaine Ponsot’s holdings cover parts of three Rully premier crus in Burgundy: Molesme, Montpalais, and La Fosse. In addition to the 1er cru parcels, Ponsot farms 2.83 hectares in the “En Bas de Vauvry” Monopole as well as another 0.46 ha in “Rully Village” vineyards

Domaine Ponsot was established by Lucien Ponsot in 1954 without essentially releasing a commercial “Domaine Ponsot” bottling. Lucien’s son, Bernard, had gradually expanded the family’s vineyard plots and selling the fruit to Olivier Leflaive. The stewardship transferred to Jean-Baptiste in 2000 when he was 20 years old. Since then Ponsot has been pursuing the establishment of a Domaine Ponsot ethos by small steps.

When Ponsot assumed control of the domaine, he started to gradually plant the underutilized parcels of land owned by the estate. Valuing the health of the soil and environment, Ponsot does not use insecticide, herbicides, or harsh antifungals. Any synthetic treatments are mindfully chosen over organic alternatives on the basis that the specific synthetic products are less intrusive than the organically derived ones. He is using copper at half the rate of his neighbors, supplementing the spray schedule with preventative and homeopathic methods.