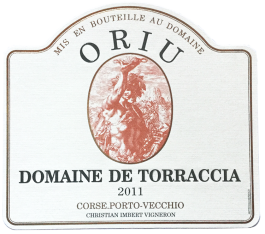 Marc Imbert is the second generation winemaker at Domaine de Torraccia in the Porto-Vecchio DOC. This sprawling domaine holds 43 hectares of certified organic vineyards planted to the noble varieties of Vermentinu (Malvoisie or Vermentino), Niellucciu, Sciaccarellu, Grenache, Syrah and Cinsault and it is farmed organically without chemical fertilizers or pesticides. From the founding in 1964, Domain Torraccia has focused on producing serious wines of lasting quality.

Before founding Domain de Torraccia, Marc’s brash and bold father, Christian Imbert, had spent 15 years in Chad during its early postcolonial era as an exporter of agricultural products to the European continent. Christian Imbert eventually left Chad, met his first wife—an American actor—and settled in Paris for some time. The couple traveled frequently and Imbert discovered a great attraction when sailing to the Greek Islands on holiday. The island of Corsica had called to him. Imbert and his party took a tour of Corsica and he fell in love the raw quality of the terrain and the aromas of the indigenous Maquis (garrigue outside of Corsica). Eventually this attraction took form as an ambition to run a vineyard on Corsica.

In the late-Sixties and early-Seventies, industrial winemaking had boomed on the eastern plains of the island with an influx of cheap labor from North Africa as France began to open up its borders to former colonies. Cooperatives mass produced high alcohol wines similar to those from North Africa and Languedoc-Roussillon at that time. But Torraccia remained true to itself as Christian Imbert built up the vineyards throughout this time and advocated for a higher standard of winemaking through the founding of the “UVA Corse” trade group and the Vin de Corse-Porto-Vecchio AOC. With the arrival of Christian’s son, Marc Imbert, Torraccia has continued to lead the pack through a dedication to indigenous varieties and eco-friendly viticulture.

Marc Imbert’s experience expands beyond his father’s estate to include time in Bordeaux, Napa Valley and business school. In the mid-Aughts, Marc took over the domaine and committed himself to manual weed control and hand harvesting. As for chemicals and spraying, Marc limits himself to using only sulfur and Bordeaux mixture (bouillie bordelaise: a mixture of lime, copper, sulfur, and water). The wines have continued to progress towards finesse and balance.