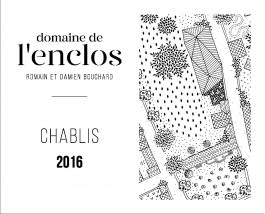 Romain and Damien Bouchard grew up in their father’s winery working alongside him from a very young age. In 2005, with the purchase of the tiny defunct Domaine de la Grande Chaume comprising 3.38 hectares of vines, the brothers started making their own certified organic Chablis in a small corner of their dad’s big modern winery. Ten years later Pascal Bouchard sold the business he had spent his lifetime building, passing along his vineyards and the proceeds of the sale to his two sons who were now displaced without a winery or any equipment. The Bouchard brothers took two years away from winemaking to create a brand new Domaine that would be everything they had always dreamed of.

The process began with two steps, the conversion plan for over 25ha of vines to organic viticulture and the purchase of a historic property in the center of Chablis that would see the construction of their new winery. This coming year, 2018, will mark the launch of Domaine de L’Enclos and the release of their 2016 Chablis ranging from Petit to Grand Crus. Their 29 hectares vines are organically farmed by a team of 12 year-round staff who work the soils fostering native ground cover and use only organic fertilizers. The debudding, canopy management, and harvesting are done both by hand and mechanically. The average age of the Chablis vines is 30 years with the oldest over 50 years old.

The winery and cellar, inspired by traditional vinification but with advanced modern energy conservation principles, were completed in 2017 and sit next to the original Chateau on the property. Gravity drives the process in the two-tier cellar and temperature is controlled by a thermal heat pump and highly-efficient concrete insulation. There will never be any chaptilization and primary and malolactic fermentations are driven by ambient yeasts and bacteria. Sulfur is added in extreme moderation upon exiting the press and before bottling. Wines are finished in both stainless steel and French oak barrels of varying age.