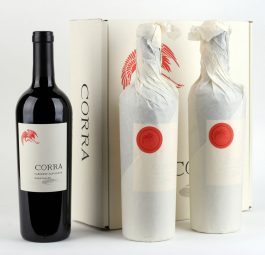 This vintage might be summed up with the word “abundance”. Whether applied to the winter and early Spring rains, the sunny days in April during bloom, the lush canopy growth during July, or the warm autumn days in September that lead to perfectly ripe fruit; this was a season of abundance and the Cabernet grapes responded with joy. The 2017 Corra Cabernet, which hails from both the rocky eastern slopes and the shallow alluvial soils of Rutherford and Oakville’s western benchlands, abounds with bright, fresh spiced-cherry aromas and a vibrant core of blackberries, vanilla and chai spices. Structurally the wine shows a solid core wrapped in a soft, satiny texture. Enjoy this Cabernet upon release or allow to age for two decades; either way it promises to delight. 100% Cabernet aged in 100% French Oak for 22 months, this wine was neither fined nor filtered prior to bottling.

2016 Corra Cabernet Sauvignon …the 2016 Cabernet Sauvignon comes mostly from Pritchard Hill as well as Oakville and Rutherford. It has an awesome bouquet of crème de cassis, graphite, cedar shavings, and dried flowers. Incredibly complex, it doesn’t lose a beat on the palate and is medium to full-bodied, has ultra-fine tannins, and incredibly purity of fruit. As with all the wines Celia makes, it’s impeccably balanced. It can be drunk today with plenty of pleasure, yet I suspect it will be even better with 4-5 years of bottle age and drink nicely for 15-20 years or more. 95+ points, Jeb Dunnock, JebDunnock.com

2015 Corra Cabernet Sauvignon Celia Welch’s 2015 Cabernet Sauvignon is off the charts. Dense, plush and alluring, the 2015 makes a strong first impression and never lets up. The move towards using more fruit from Pritchard Hill is one of the many decisions that gives the 2015 its incredibly vivid, distinctive personality. Super-ripe red cherry, raspberry jam, espresso, herbs and wild flowers are some of the many notes that develop over time. Moreover, the 2015 has a level of freshness and vivacity that I don’t recall seeing here in the past. At times, the wine’s aromatic nuance suggests an elevated presence of Cabernet Franc. The interplay of exotic ripeness and energy is simply compelling. What a gorgeous wine this is. 96 points, Antonio Galloni, Vinous

2015 Corra Cabernet Sauvignon The 2015 Cabernet Sauvignon comes from sites in Pritchard Hill and Rutherford and is another terrific wine. More concentrated and dense than the 2014, with notes of black fruits, scorched earth/mineral, licorice, and spice-box, it’s full-bodied, tight and concentrated on the palate, with ample tannin. This focused, lengthy, impressive 2015 needs 3-4 years of bottle age and will shine for 15-20 years. 94 points, Jeb Dunnuck, JebDunnuck.com