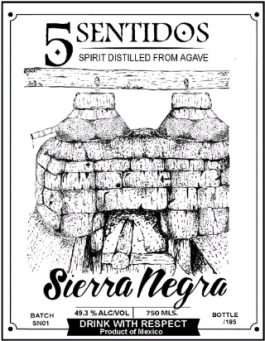 Alberto Martinez Lopez has been distilling agave spirits for nearly three decades. He and his son-in-law Reynaldo distill the massive agave Sierra Negra (A. Americana) in their traditional palenque in Santa Catarina Albarradas, Oaxaca.  Alberto and Reynaldo harvest cultivated Sierra Negra that take twelve to fifteen years to reach their maturity. Once harvested, Alberto bakes the agave in an earthen oven lined with river rocks , palm mats, and banana leavesfor a week.  He and Reynaldo subsequently mash the cooked agave by hand with wooden mallets, before they set it in stone tanks and let it ferment naturally.

The elevation in Santa Catarina is approximately 7,500 feet above sea level, which leads to cold nights. In order to jump start and stabilize the fermentation, Alberto will add ground "tepehuaje" bark to the fermentationthe bark is a natural source of nitrogen and enables fermentation to take place in colder temperatures. He believes this is one of the most crucial elements that makes his spirit stand out.

Once fermented, the mash and tepache are double-distilled in clay pot stills at Alberto's palenque, La Escondida.