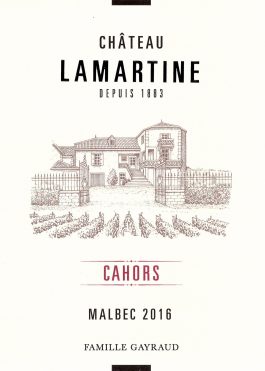 Chateau Lamartine was built in 1922 on the site of a century old oak tree. Local legend recounts that in the Middle Ages this was where Martine, the daughter of the local Baron, would meet her various suitors. This family property dates back to the Middle Ages, and the vineyards have survived the Gallo-Roman wars as well the invasion of phylloxera in 1878.

Born in the Chateau, the current winemaker/owner, Alain Gayraud, took over from his grandparents in 1975. Encompassing 28 hectares of vines ranging in age from 20 to 120 years old, the Domaine is in the westernmost reaches of the Cahors appellation, making Chateau Lamartine the only Cahors domaine that benefits from the Atlantic influence. The vineyards here dominate the best micro-climate along the Lot River, and all of the plots are south facing on the oldest terraces in the appellation, where the soil is a limestone base with lots of stones.

The grape of Cahors is known by several names. The ancient name of Auxerrois is rarely ever used. Instead the locals call this dark inky berry Cot. In other parts of the world it is known as Malbec. Alain maintains sustainable agricultural practices and does a minimum of 2,000 hours worth of green harvesting per vintage in order to attain the naturally low yields he seeks. The depth of the roots mean that the vines are very rarely over stressed, even in the hottest of years. The total production is always around 10,000 cases a year.