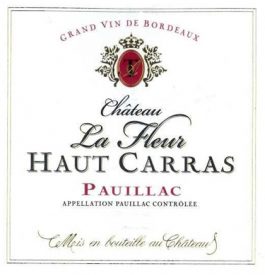 Albert Tiffon from La Fleur Haut Carras has built up his estate in small steps since 1982.  Unable to take over his parent's estate, as they were still active, he decided to create his own by parceling together some small plots when he could. He now owns 8 hectares in Haut Médoc, and above all, 4 hectares in Pauillac.

Today it would be impossible for him to purchase new plots of Pauillac, as the pressure from all his neighbors (D'Armailhac, Mouton, Pontet Canet and so on), is hard. Albert often receives calls to know if he is willing to sell his 4 hectares, which are worth about 2 million euros per hectare! A Mouton Rothschild for instance, could bottle wine made from Albert's vineyards in Pauillac and sell it for 300€ per bottle in contrast with Albert's 20€. It is for this reason that all the little properties in the famous Left Bank appellations sell their estates to the big classified growths. And so we consider ourselves very lucky to have a first Pauillac wine from a small producer, not a second, or third or fourth wine from a classified growth. Albert is committed to continuing to work his small estate, is proud of his wines and proud to be one of the last in Pauillac.