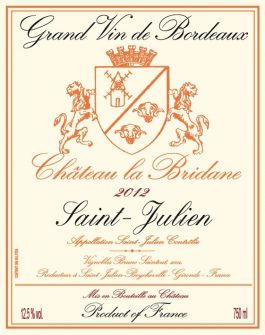 The estate of Château La Bridane has been in the same family since the end of the 17th century. Now led by Bruno Saintout, the land originally belonged to the parish of Saint Laurent and was tended to by Abbot Bridane. Bridane was a secular priest who earned extra income as a miller with a windmill near the site where the cellar stands now. With the end of The Ancient Regime and beginning of The French Revolution, the land passed from the hands of the Church to Bruno Saintout’s lay ancestors, setting about their future as a récoltant indépendant.

Today the land of Château La Bridane, marked by the famed Garronese gravels of Saint-Julien, is a dense estate vineyard with a relatively high proportion of Merlot, Petit Verdot, and some Cabernet Franc for an appellation planted to 90% Cabernet Sauvignon across the board. These parcels of Château la Bridane are sandwiched between those of Châteaux Léoville-Poyferré and Léoville-Las Cases.

Brunot Saintout farms based on the principles of lutte raisonée and alternates the ground covering with partially plowed rows between the well-manicured vines. The modern cellar overlooks the Gironde from the heights of Saint-Julien. At harvest the fruit is sorted three times with progressively stricter standards to ensure only the best fruit makes it to the crusher. After maceration and pressing, the wine rests in two-thirds-new oak barrels for about a year and a half before bottling.