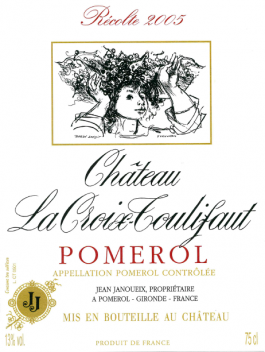 Château La Croix-Toulifaut is an under two hectare parcel between Château Beauregard in Pomerol and Château Figeac in Saint-Émilion. This planting of 85% Merlot and 15% Cabernet Franc sits on the iron-rich soils of the Pomerol plateau elevating Merlot to its proper status. In 1972, the property itself was purchased by Famille Jean-François Janoueix, a steward and owner of prestigious Saint-Émilion and Pomerol estates since 1898. The Janoueix wines have been served for presidents and dignitaries during official state dinners.

The reputation of the La Croix-Toulifaut vineyards reach back even further to the Medieval era when the religious pilgrims of Saint Jacques gathered in front of the stone cross La Croix Toulifaut as part of devotions. This same cross stands to this day, serving as a landmark for this vineyard. The Toulifaut name itself has its roots in the old Latinate-French phase “tot li falt” or “tout y faille” (everybody will succumb). The story is even the most devout person cannot help but be drawn to the Pomerol from these vineyards. Château La Croix-Toulifaut's wine has been called “The Princess of Pomerol” based on its feminine representation of the appellation’s characteristics.