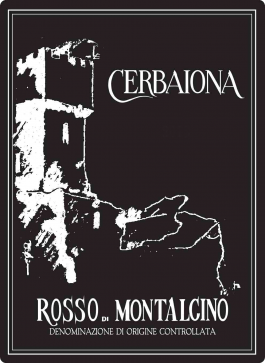 The manor house of Cerbaiona dates back to the 17th century, but the estate made its debut as a star producer of Montalcino with the 1981 vintage. Under the direction of Diego Molinari, Cerbaiona's long-standing reputation as a hidden gem was revitalized and immortalized as a great Brunello di Montalcino producer. Today, the Cerbaiona estate is moving forward with a great purpose and vision, continuing to live up to the high praise and scores given by critics such as Antonio Galloni (Vinous), Daniel Tomases and Monica Larner (both of Wine Advocate).

Diego Molinari, Cerbaiona's founder, retired from a career as an Alitalia commercial pilot at the age of 46. He and his wife, Nora, began looking at vineyards in 1977 with the dream of pursuing a new phase of life as winemakers, eventually becoming enamored with the Cerbaiona estate and its ancient farmhouse, Renaissance era garden and private chapel. Cerbaiona is situated in the middle region of the Montalcino appellation, representing the balance between southern Montalcino's ripe fruit characteristics and the north's fresher, more-structured reds.

Adamant about maintaining the winemaking traditions of Brunello di Montalcino, Diego consulted with the region's top estates—particularly Biondi-Santi—but also with the small growers that surrounded his new estate. The locals had always honored the historic and ideal setting of Cerbaiona's viticultural past and local growers were hired to replant and expand the estate's vineyards in 1978. Commercial production started in 1981, and the following vintage established the wine as distinctly different from other Brunello. 1982 marked Cerbaiona worthy of a unique status as a small, but notable, vineyard and estate within the larger region. And this prestigious distinction has continued to today as Cerbaiona's wines receive high praise around the world.

1.6ha of the estate's Sangiovese yields 6,000-7,500 bottles a year of Brunello di Montalcino. 4.5k bottles of Rosso di Montalcino come from about 0.6ha, and the remainder of the 3 total hectares is devoted to the Toscana IGT release. The vineyards were expanded and partially replanted in 1986 and 2000; but 2015 brought about a true moment of growth when Cerbaiona transferred hands to a new group of investors.