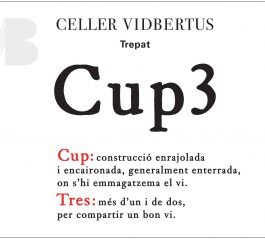 In 2009, David Rovira asked his son Albert if he wanted to do something more useful with their family vineyards instead of bringing the grapes to the local cooperative, and so began their adventure into winemaking at Cellar Vidbertus. The name “Vidbertus” comes from the blending of father and son names David and Albert.  While most of the extended family members are involved, the two at the forefront are Albert and his father.

For the first vintage, Fernando Zamora a family friend, who is also the winemaker at Clos de L’Obac, mentored them and helped to make the wine.  They were hoping to produce 1,000 bottles that year but were only able to get 996 and so their top level wine is called 996. They make their wine in the “Viver de Celleristes de la Conca de Barberà, which is a shared facility (to help with costs) but the fruit is all Estate. After the first vintage, Sr. Zamora returned to Priorat and Martí Magrinyà joined the team as winemaker. He has now made the wine with Albert for 7 years.

Climate-wise, Conca de Barberà has a diurnal temperature change of 100+˚F, during the day to 53˚F in the night. There is little rainfall, in the region, and so cover crops are not needed. In fact in such dry conditions the crops would threaten the vitality of the vines by competing for the water supply.  Practices here are organic but not certified.

T.Edward is currently working with three of the Vidbertus wines. Ud2, 100% Parallada named after the parallel plots in the vineyard of David and his brother who make 1 one of the 2 plots (Un de 2). T de Trepat, which is a 100% Trepat Rosat.  And the Cup3 which is a red blend of Predominantly Trepat and with Garnacha blended in.