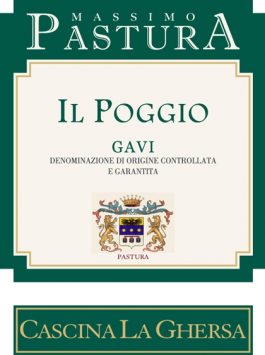 Gavi DOCG Il Poggio comes from a single vineyard, with 60 year old vines cultivated between the villages of Gavi and Arquata Scriva, at 350m altitude on very clayey, stony soil.  Severe pruning and green-harvest are necessary to drastically reduce the yield per plant and obtain rich, concentrated grapes. Cortese is one of the most popular Piedmontese white grape varieties.  Very fresh, floral and crisp, it yields a perfect “summer time” wine, to pair with oysters and seafood.