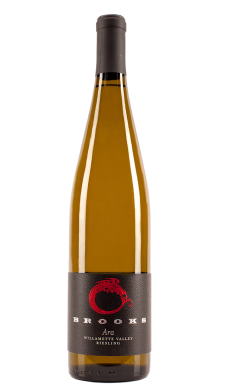 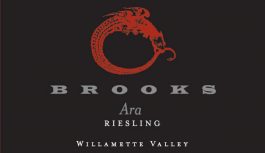 Ara is a Southern constellation meaning the “altar of the Gods”. The wine is composed of 50% Brooks Estates and 50% Yamhill Vineyards in Yamhill-Carlton. The Brooks Estate is a 1973 own-rooted planting of Riesling. South-South-east slopes of volcanic ash and jory soil. Elevation between 590-720’.  The Yamhill Vineyard was planted in 1984 on its’ own-roots to the Guisenhiem 110 clone.  Elevation 420’.

Founded in 1998, Brooks is a reflection of visionary Portland native, Jimi Brooks. His reverence for the land and vines made him a practitioner of organic and biodynamic farming. This great respect for vineyard individuality and mastery of blending, allowed his wines to achieve great depth, flavor and balance. While Jimi is no longer with us, his dynamic spirit lives on through his wines, his family and his friends. With the outpouring of generosity and friendship by the Oregon wine community, Brooks Wines continues and is stronger than ever. Jimi’s son Pascal who was the ultimate source of his passion for life, is the sole owner of the winery, his sister Janie Brooks Heuck has remarkably volunteered her time to lead the winery and vision, and Chris Williams, Jimi’s dear friend and assistant, took over all winemaking and vineyard management.

Brooks has been steadily guided with the legacies that Jimi left: his strong commitment to organic and biodynamic farming in the vineyards, gentle approach to winemaking, excitement for future harvests and endlessly promoting how beautiful Pinot Noir and Riesling can be grown and produced in Oregon. The approach to winemaking is simple. They seek natural balance in the vineyard and cellar, to show the true expression of terroir in their wines. They are passionate about organic and biodynamic farming; as they believe it not only creates better wines, but these important practices help keep their earth alive and ecosystem intact.

In 2009, Brooks purchased the Eola Hills Vineyard. This site was originally planted between 1973 and 1977 with Pinot Noir and Riesling. The vineyard still has 10 acres (5 of each varietal) planted on its' own rootstock. The remaining acres are mostly Pinot Noir with a tad of Pinot Gris. In 2012, the Estate Vineyard was certified by Demeter.

“A truly complex mosaic of floral, citrus and fresh fruit notes…Mouth coating viscosity, ethereal texture, delicious with bright acidity. This Riesling is stunning both for the clean precision and also for the structure and depth of the perfectly ripe fruit..”