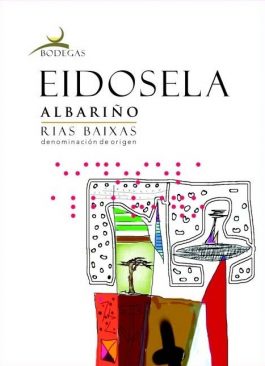 In 2003, a young group of Artisan winemakers set out to unify smaller family owned vineyards in Rias Baixas. They wanted to offer them supply and support services, and bring them all together, in one winery, to make great wine.  This was the beginning of Bodegas Eidosela.

Bodegas Eidosela is located in Galicia, more specifically in Condado de Tea (Tea County), a sub region within Rias Baixas. The Climate here is influenced by the Atlantic and the Azores Anticiclón which imposes hotter temperatures and less rain during growing season. In addition to these conditions, the south-facing exposition of the vineyards allows for longer sun exposure, early ripening and so a need to harvest early. In some cases, as early as two weeks before other sub regions in the area.

The predominant varietal in the vineyards of Bodegas Eidosela is Albariño, which is native to Galicia and produced mainly in Rias Baixas.   Treixadura and Loureira also are present in the vineyards, in smaller quantities and are used for blending. The traditional wines from this region were blended, but as the modern market realized the appeal of ‘purity’, the mono varietal wines were realized and Albariño became the star!

In total, the grapes for Bodegas Eidosela are sourced from 60 hectares of 1 hectare extension plots.  The plots are owned by small families who indeed still work their individual sites.  There is a standard and a guidance for farming practices, amongst the collection of plots, which results in sustainably healthy fruit. And the wine is made under the leadership of winemaker Jorge Hervella.  Hervella is an award winning enologist, and is a member of the regulatory boards of both Rias Baixas and Ribeiro.

The Vineyards are trellised in pergola fashion in order to avoid the humidity and at the same time allow for sunlight and air circulation.  The average age of the vines is 15-30 y.o. and they are rooted in granitic soil, with sand for excellent drainage.

The two wines in our Portfolio are Eidosela which is 100% Albariño and the Arbastrum, which is a blend of Albariño, Loureiro, and Treixadura.  The name “Eidosela” derives from the names of the two counties that the vineyards span across, and “Arbastrum” from the name of the Village, Arbo, and a star, Astra.