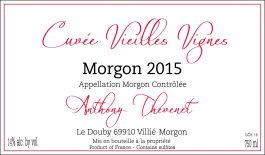 Anthony Thévenet works and lives among his vines and animals. His life is defined by his quest to preserve the history of the region through a steadfast devotion to his vines. The vineyards are all farmed organically with very little mechanization and no pesticides. All grapes are harvested by hand and sorting is done directly in the vineyard.

Anthony Thévenet is a member of the new generation of vigneron defending the purity and legacy in Cru Beaujolais. In 2010, Thévenet inherited his grandfather’s vineyard in Villié-Morgon: a selection of vines ranging from 40-150 years old. That same year he began working along-side Jean Foillard & George Descombes in the vineyard and in the cellar. While Thévenet released his first vintage in 2013, he has honed his skills and passion for vin naturel for 6 years in Decombes’ and Foillard’s while continuing to develop his own wines. In 2014, he inherited a parcel in Côte du Py Morgon. This vineyard is in the heart of Beaujolais and widely considered one of the truly magical sites in all of Beaujolais. The following year, Anthony added to his holdings by securing 0.7 ha of vines in Beaujolais-Villages and in 2017 he started farming 2.5 ha of Chénas. The wines ferment in a mix of old wood and concrete tank, and—according to the vintage— the fruit goes through 10 to 25 days of carbonic maceration. They are always are made without correction, ferment with indigenous yeasts and without pump-overs, and are bottled unfined and unfiltered.