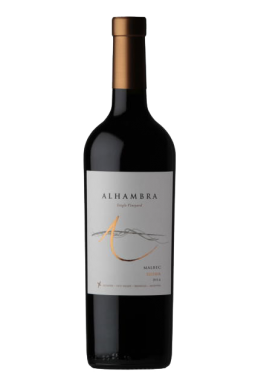 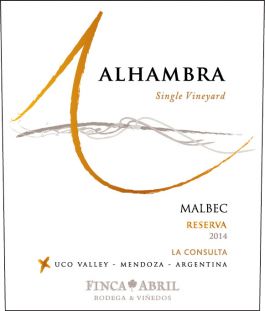 Founded by Gustavo and Maria Laura in 1996, Finca Abril has vineyards that date from 1922.  Their 22 hectares of vines are planted with Cabernet Sauvignon, Malbec and Merlot.  On their two farms in La Consulta, which is located in Valle de Uco in the Province of Mendoza, they prune and thin their vines to ensure low-yields and high quality fruit.

Hand harvested and selected, the grapes are fermented in stainless steel tanks, where it is pumped-over, a process called "remontajes", in both open and closed (without air oxygen) tanks.  Once the fermentation is complete, the wine sits on its skins for approximately 15 days. Later, 40-50% of the wine is relocated to barrels and the remainder rests in stainless steel.

Three Alhambra wines represent the entry level for Finca Abril, but do not stand apart. The wines are driven by the terroir of the same two estate vineyards as the “Finca Abril” wines: Altimara and La Consulta. The selection for Alhambra focuses on the younger vines and the vinification is the same. The Alhambra wines rest in used French oak barrels for 12 months.

The Finca Abril’s single vineyard wines represent their best Malbec grapes from an eleven acre vineyard that dates back to 1922.  After two years in the cellar, the wine is aged in 100% new French oak and released only when it's ready.