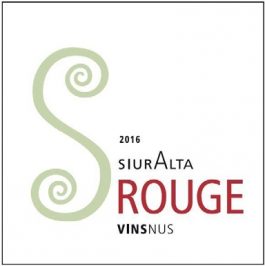 “If we tried to classify wines by categories, SiurAlta Rouge would fit into the “blush” wines, for its bright carmine and its drinkability. It would also take part in the cheerful character of the “vins de soif”, with its combined balance of citrus and bitter. Rouge brings together two vineyards of the same altitude…on both sides of the valley: Camí del Montsant on the East and Gritella on the West; the percentage of each vineyard that is used varies according to each vintage.” – Winemaker’s Notes

Alfredo Arribas has already had one successful career as an architect with experimental buildings dotting the globe. But at the end of the 1990’s, his work led him to establish deeper roots in the city of his birth, Barcelona. The Priorat region is 80 miles to the southwest of Barcelona and Arribas was naturally drawn to it as a wine lover. He purchased an estate, Clos del Portal, and began producing cult-worthy estate wines under the name Portal Del Priorat. The wines are inspired and the labels are playful. However, Arribas was looking for fruit to lighten and boost the acidity and lift the profile of his “Tros de Clos” wine, so he explored vineyards reaching further out of Priorat and into cooler, northwestern Montsant.

The vineyards Arribas found in Montsant inspired him to extend his vineyard holdings and produce two additional family of wines under the banner of Vins Nus (Eng. “naked wines”). The SiurAlta wines from Vins Nus are a collection of high-altitude wines defined by terroir, freshness, acidity, and lightness with nothing added or taken away. The vineyards of SiurAlta wines are organically farmed and tended to by hand as the old goblet-trained vines dot the steep mountainsides sitting above altitudes of 700m. The majority of vines are in Cornudella del Montsant and the Montsant Natural Park, vines dating back 40 years or more. One cluster of vineyard plots sit below the Sant Joan del Codolar hermitage with calcareous soils and varied terroirs. Then farther to the northeast is the Gritella Mountain vineyards (clay and slate soils) that look across the valley to the west. This cluster of vineyards contains 2 hectares of newer vines as part of an effort to recover the Grenache Gris vines of Montsant. Practices are increasingly inspired by biodynamics as the vintages go by.

In the cellar, fermentations are spontaneous and preserve whole clusters employing either carbonic macerations or short traditional macerations so as not to over-extract tannins. Three milligrams of sulfur are added before bottling to stabilize the wines and ensure quality after transport. Almost no oak is used in fermentation or élevage, instead a small amount of the wine stays in small stainless while the majority of wine is fermented and aged in cement eggs or clay amphorae of varied sizes and shapes.