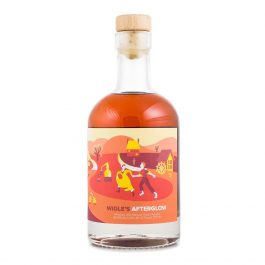 Pittsburgh in the 1840s -- a tryst between a wealthy whiskey baron’s daughter and a poor red-headed mill worker produced Henry Clay Frick, future steel mogul. Their unconventional love story is the inspiration behind our own spicy lovechild: Wigle’s Afterglow Ginger Whiskey.

Wigle is proud to release its second product developed in collaboration with Chatham University’s Food Studies Graduate Program. This will be a seasonal product released once a year and another brave attempt at redeeming the category of flavored whiskeys. Believe us, this is no cloying, sugary-sweet, chemical flavoring-laden whiskey. Afterglow is free from preservatives, colorants, or artificial flavorings.

After a year-long development process, Afterglow Ginger Whiskey was made with baby ginger grown at Chatham’s Eden Hall Farm (an offshoot farm-campus just 20 miles from Pittsburgh) and, as a nod to our love story, at the Frick Greenhouse by Grow Pittsburgh.