Domaine Dirler-Cadé is one of the finest domaines of Alsace with almost half of the vines in the Grand Crus as well as plots in five lieux-dites. Dirler-Cadé represented by Jean and Ludvine Cadé, the joining of two Alsace winegrowing families under one house. The vineyards are certified organic and biodynamic, and the wines are just as fitting in Michelin three-star restaurants as they are at natural wine fairs. The Rieslings, Sylvaners, Pinot Gris, and Gewürztraminers are all exceptional, but the domaine has also been celebrated for their Crémant d'Alsace Brut and Brut Rosé.

In 1871, Jean Dirler settled in the tiny village of Bergholtz and founded Vins Dirler. Bergholtz and its 1,000 inhabitants are tucked up in the lower hills of the Vosge Mountains, 25km south of the city of Colmar in the Upper Rhine department of southern Alsace. Today, the Domaine is run by Jean Dirler, who represents the 5th generation,.

The family began the conversion to biodynamic viticulture in 1998. Jean and his father began by converting 6 hectares of the lower slopes of vineyards and continued in 1999 with converting the remaining 3 ha. of the steepest and narrowest trellises that require the use of horse and plow even today.

In 2000 the Domaine increased in size as Dirler was joined by Ludivine’s familial vineyards, Domaine Hell-Cadé, in nearby Guebwiller. The merger, now known as Dirler-Cade, brought the total vineyards planted to 18 ha., and these new vineyards were added in stages so that they too could be properly converted to biodynamics. The entire production was certified AB (Agriculture Biologique) and BIODYVIN (Bio-Dynamic) as of the 2007 vintage. In the vineyards, the soil is plowed 4 to 5 times a year, and old canes are not pruned off until March. Dirler-Cadé removes flowers instead of green harvesting. Only sulfur and homeopathic doses of ‘horsetail’ are used against disease and pests, and fertilizers are never used.

Close to half of the Dirler-Cadé vineyards (42%) are in the Grands Crus of Saering, Spiegel, Kessler and Kitterlé. In addition, the Domaine also has plantings in the 5 lieux-dits known as Belzbrunnen, Schwarzberg, Bux, Schimberg and Bollenberg. 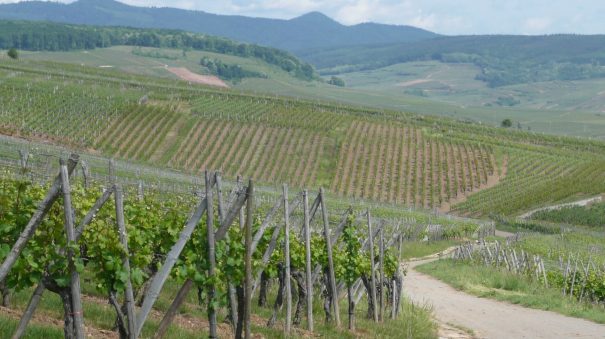