About
Bodega Adegas A. Coroa

Angel Lopez and his family founded this winery in 2002 after spending years in the nursery business in Valdeorras. Native to the region, the nursury supplied a majority of the wineries with their vines and have been on the forefront of Valdeorras' reborn interest in the Godello varietal.

Godello was one of the original varietals grown in the region by the Romans over two thousand years ago, since then the grape has slowly drifted toward obscurity until newer winemakers in the area decided to resurrect this unique varietal that is native to Valdeorras. An ancient varietal isn't the only Roman treasure that Angel Lopez and his family utilize in their winemaking; they found an old Roman edifice whose remaining chimney is reminder of the glorious past of this region. They restored the original building, respecting the parameters of that time period, stone, wood, mud and iron. They installed the latest technology including a rotary fermenter. Small 10,000 liter refrigerated tanks allow for the individual parcels to be separately vinified.

They farm a total of 10 hectares comprised of several different vineyard sites all located in the area around the winery at A Rua. The parcels have varying exposures and elevations but share slate soils and the Godello grape as a unifying element. As the most in-land part of Galicia, Valdeorras enjoys warmer days than most of the region but still benefits from the cool air traveling along the river Sil. Crucially, A Coroa's vineyard plots are up on the hillsides (mostly around 500m elevation) rather than near the valley floor where it can get very hot in the summer, with temperatures at times exceeding 40 degrees Celsius. 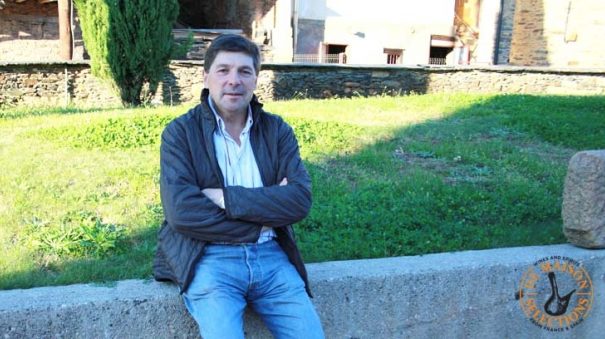